VR games have made significant improvements since it first came out several years ago. Gone are the blocky pixels and the vertigo-inducing framerate, replaced by slick visuals that immerse you in the virtual reality environment.

2021 looks to be a banner year for VR games and hardware such as the PSVR, Quest, Rift, and SteamVR. Here’s a taste of the VR titles you can expect as the year goes on.

How would you like to play Fortnite…in virtual reality? Population: One is as close as you can get in that regard. The game, developed by BigBox VR (the same one who made the popular Smashbox Arena) features players duking it out in a battle royale arena.

Sure, there are dozens of free-for-all shooters that you can play, but there’s something unique about turning your head to look left or right and immersing yourself in HD virtual reality. Originally, Population: One was supposed to be released in 2019 but has been moved to 2021.

If you love the series The Walking Dead, you’ll love this upcoming VR game. Be prepared for an in-your-face experience where you struggle to survive in a world that’s populated by both non-living and living monsters alike.

TWD Onslaught is the official game from AMC, the show’s producer. Some of the title’s highlights include a new and exclusive story, the ability to fight via real-motion ranged and melee combat, and of course, the atmosphere of navigating a post-apocalyptic landscape. Survios has set a tentative 2021 release date for their game.

There’s not much to say about Solaris: Offworld Combat because the developer, First Contact Entertainment has pretty much kept the game under wraps. If there’s anything to go by, the official trailer should keep your curiosity piqued until its release this year.

First Contact Entertainment is the same one that made Firewall Zero Hour in 2018. Solaris: Offworld Combat is a multiplayer shooting game that’s set in the near future and looks similar to Mass Effect.

Sniper Elite is a critically-acclaimed game that has you playing as an expert marksman, eliminating targets using long-distance shooting. In virtual reality, it’s like a whole new game, thanks to intuitive controls and mechanics that are suited for VR.

Developers Just Add Water and Rebellion have teamed up to provide an innovative Sniper Elite experience. You play as the protagonist- an Italian Resistance sharpshooter and go on daring missions through a World War 2-ravaged landscape. Though both developers are keeping mum about the release date, we’re hoping that they can make it in time for this year.

5. Medal of Honor Above & Beyond

First-person shooters and VR are a match made in heaven. The slew of upcoming VR games in 2021 is proof that the genre should thrive in the virtual reality environment and continue to do so in the next decade.

Case in point- Medal of Honor: Above & Beyond is a game that puts you in the thick of WW2 and in war-torn Europe. You’re an OSS agent sent to aid the French Resistance, sabotage Nazi bases and subvert enemy plans on air, sea, and land. Respawn Entertainment is aiming for a 2021 release for the Rift.

Phantom has you playing as a, well, phantom or more specifically a Ghost agent sent to neutralize threats. Speaking of which, there’s more than one way to skin the cat- you can either take stealth and move around in the shadows or use the equipment and hardware you’re given to blow up targets.

Gameplay revolves around the Eastern Wetlands in Black Sea Region, hence the canoe. Developer nDreams has set the release date for 2021 on the Quest and Rift platforms.

After the Fall is a VR game that takes place in a post-apocalyptic and alternate ’80s, where society ground to a sudden halt. You’re an explorer, one among the many who try to take back the world from monsters.

What’s interesting about the title is that it plays like an MMO. You and others can team up to take territories and defeat bosses while fighting off multitudes of zombies. To make things interesting, you can craft your own weapons and unleash powers using real-life movements.

After the Fall is expected to launch 2021 for the PSVR and SteamVR. It’s made by Vertigo Games, the same ones who made Skyworld and World of Diving.

Ever wanted to play as a Marvel superhero but were too afraid to ask? Camouflaj has heard you, and now they’re bringing Iron Man to VR for your enjoyment. It’s a title that’s exclusive for the Playstation VR and Playstation Move controllers.

In theory, all the things that Iron Man can do, you can recreate. You use Motion to activate the Avenger’s flight boots or blast enemies using the suit’s Repulsor Blasts. Upgrade your suit and gain new abilities in Tony Stark’s garage and use them to fight Iron Man’s foes in action-packed battles.

Every self-respecting gamer will have heard of or played Half-Life. Alyx is the protagonist’s partner in many of the games, and now she’s finally getting her own title on SteamVR. The scenario is the same- Alyx will be fighting against a superior alien race called The Combine to save humanity from extinction.

Valve, the game’s developer has set a release date of March 2021 for SteamVR. If you’ve played any of the Half-Life series before, you’ll feel right at home in Half-Life: Alyx and its environment.

Lone Echo was an impressive achievement for VR games, and its sequel, Lone Echo II should do the same. Ready at Dawn presents the same protagonists you’ve come to know and love- Jack and Liv will be returning to Saturn to try and unlock Lone Echo’s mysteries and journey deep into space.

It’s a must-play title for sci-fi enthusiasts. The only consolation you can get while waiting for the game to come out is to replay the first Lost Echo title or to experience it for the very first time. 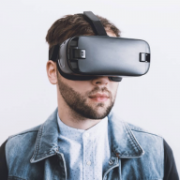 James Jones
If you want the lowdown on anything electrical or digital, James is your go-to guy. As a computer engineer, he has experience with both the hardware and software elements of electrical devices. He knows exactly how things are supposed to function and what makes them tick. When he isn’t working, he loves testing out the latest tech products, computers, phones, gadgets, and anything VR-related. Of course, James isn’t above analyzing other devices as well. If it has wires, he’s ready to dive into it and check it out. James is detail-oriented and puts the products through their paces. Once he is done with the latest gadgets you will know what they are capable of. If he isn’t trying out new gizmos, he has his finger on the tech industry pulse and tracks all the latest news and developments.

VR Is The Solution To The Housing Crisis