The Extreme Fliers Micro Drone 2.0 is a unique micro quadcopter built to help beginners fly a drone with ease. It weighs just 1.5 pounds and has some features of professional drones but it is very easy to control for a new pilot. With an optional 720p HD video camera that can capture video footage and still pictures as it flies, this drone is a great tool for learning and entertainment. The package includes a ready-to-fly kit comprising the drone, one 3.7V lithium polymer battery, a USB charger, 2.4 GHz remote controller, and 4 additional propellers. The HD camera may be purchased separately. The following Extreme Fliers Micro Drone 2.0 review highlights many important features of this quadcopter.

The Micro Drone version 2.0 has a solid and durable design. It has many valuable features that make this drone unique. For instance, the lightweight metal used to make the body of the drone, and metal box profile cross axle, are strong enough to withstand multiple crashes. To improve its durability, this quadcopter is designed using modular components that are fastened together. Four propellers, (powered by 4 rotors) are positioned at the ends of the axle which also bears the landing struts. Two of the propellers, at the front, have a red color while the other two, at the rear, are black. Below the propellers, there are LED lights that help you to know the direction the quadcopter is flying, especially when flying at night. 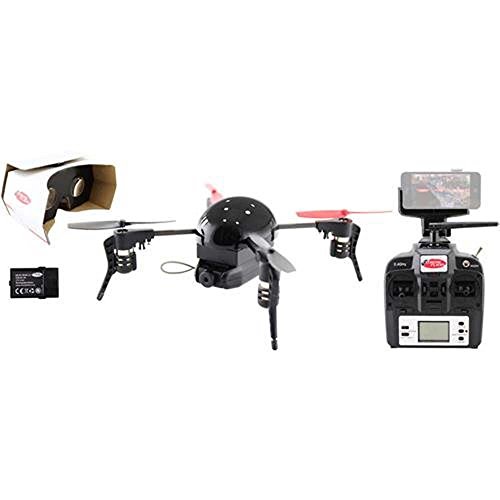 All the external and internal hardware components of this drone are built for strength, performance, and longevity. Micro Drone 2.0 has highly efficient coreless motors that can run at 29,000 rpm on micro bearings. For efficient dispersal of heat, this drone has an anti-thermal self-cooling motor cage. Electronic stability is also enhanced with a 6-axis gyroscope and a self-learning algorithm which enables the quadcopter to recover from an inverted position after it is thrown into the air.

A 2.4 GHz radio frequency transmitter is used to control the movement of the drone. This device is also used to record videos and snap pictures when the camera is attached to the aircraft. It has an LCD display that provides information on flight speed, altitude, flight range, battery charge, and flight time. You can use the 4-channel transmitter to control the drone in six directions: up, down, left, right, forward and backward. Also, this transmitter is very responsive; so the quadcopter will change direction or speed quickly when you touch the controls. With this remote controller, you can fly the drone within a maximum range of 400 feet. But as a beginner, you should not attempt to fly at a very high altitude or distance until you have mastered your basic flying skills. Thereafter, you can use the pre-programmed algorithm included in the transmitter to do 360-degree flips with the drone.

Extreme Fliers Micro Drone version 2.0 was the first micro drone designed to work with an HD camera. Although the camera is not built into the drone, you can order for the camera along with the drone and attach the camera to the aircraft. The camera designed for this quadcopter has a wide-angle lens and it can take 720p high definition images. It also has a slot that can accommodate a microSD card for storing the video footage and still images captured during flight.

Pictures and videos captured by this drone are amazingly sharp and stable. This is due to the unique flight stability of the drone. So you don’t have to learn how to hover the quadcopter perfectly before you can take professional quality aerial photographs.

Micro Drone 2.0 is powered with a 300 mAh 3.7V lithium polymer battery. The battery gives a total flight time of about six to eight minutes without using the camera and about five minutes of flight time while the camera is used for recording videos. It takes about 40 minutes to recharge the battery so it is advisable to buy a pack of 3 to 5 extra batteries so that flight time can be extended to about 25 minutes while the camera is working. Battery status is displayed on LCD of the transmitter during flight.

Overall, the Extreme Fliers Micro Drone 2.0 offers great value for its price. If you are just starting out and you want to quickly learn to fly a drone and use it for aerial video and photography, this is a good drone, to begin with. The stability in the air and the high quality of its pictures make it a good choice for beginners who want to fly either indoors or outdoors.

What Are the Best FPV Goggles for Drones & Quadcopters