Being able to see in a dark area is vital to a person’s safety. A flashlight that does not emit enough light will not detect hidden dangers. Having a mini tactical flashlight that illuminates a dark area from a distance is the perfect safety tool. A company called VoidHawk makes this perfect safety tool available to the masses. I wrote a review here about the same light but different manufacturer. VoidHawk uses advanced technology that yields a high level of illumination. This technology is so advanced that this flashlight is used by military and law enforcement personnel. A superior tool does not always come in a large size.

Mini-Raptor-M2 is a prime example. The Mini-Raptor-M2 is the latest compact model flashlight from VoidHawk. It features the latest CREE XML2-U2 High Power Digital LED Emitter Technology. This technology makes this model 20 percent more efficient than the previous XM-L models. On the highest level of brightness, the Mini-Raptor-M2 emits 600 lumens. This is more than enough light to blind an attacker in the middle of the night. Another improvement is that this model runs cooler than the previous XM-L models. Because it uses less energy, the battery lasts much longer. The tail cap switch makes it convenient to turn this flashlight on and off.

The Mini-Raptor-M2 flashlight is the most powerful flashlight on the market. Its advanced illuminating technology makes it an item that every person must own. A person will feel much safer walking down the street at night. With this flashlight being only 4 ½ inches long, it easily fits in a deep purse or pocket. Being made of a superior material also differentiates it from other flashlights. Unlike other flashlights that are made of plastic, the Mini-Raptor-M2 is made of the same aluminum that is used to build aircraft. This flashlight will be making a person feel safe for a long time.

The Police Metal Rechargeable Tactical FlashlightThe police metal rechargeable tactical flashlight is a flashlight that is meant to take care of the needs of Police, Military, and Professional Security Members. The flashlight can also be used for your everyday civilian needs as well. The material is also made of aluminum alloy that is Military grade. The aluminum alloy material keeps the flashlight protected so that it won’t get damaged and will keep functioning.   Built-In Stun Gun
The flashlight also has a build-in stun gun. The stun gun is completely rechargeable. The flashlight is also rechargeable. The light bulb that is included with the flashlight has a life of approximately 100,000 hours. The light on the flashlight shines so bright that it will light up the entire surrounding area.   Binding Effect
In addition to the light, if you shine it in your attacker’s eyes you will be able to give them a temporary blinding effect that will make it easier for you to utilize the stun gun feature. This feature alone adds added protection to you as the user.   Safety Features
The rechargeable mini tactical flashlight also has a built-in safety feature. The flashlight needs to be in the position that reads stun in order for the stunning feature to function. There is a safety position that is located on the flashlight that is easily assessable so it can be turned on from the safety position and back to the functioning position in less than a second. The police metal rechargeable tactical flashlight can also add safety by utilizing it for alternative reasons. For example, if you store the flashlight in your vehicle you can use it in the event of an accident. If you are trapped inside the vehicle the top edge has a unique set up so that it can help shatter most vehicle windows. 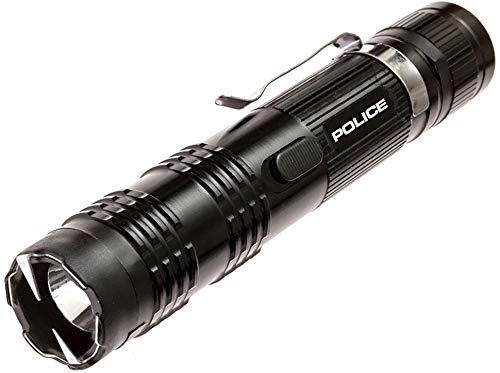 Fenix UC40 Flashlight: Perfect for Every Occasion The Fenix UC40 Ultimate Edition mini tactical flashlight is the light for all of your needs. Whether you need a flashlight for a safety kit, need a flashlight to do work, or are looking for something to light your way on a camping adventure, the Fenix UC40 Ultimate Edition flashlight is the perfect light for you. This flashlight is unique in the fact that it can be charged three different ways, making it adapt to whatever your need may. Many others are talking about this light in forums here.   Features:
• Wide Beam Light- This flashlight offers a wide stream of light with the 4 levels of brightness coming from LED lights. The beam will also go over 600 ft. allowing for brightness and light at great distances for whatever activity you may be doing.
• Made with Aircraft Grade Aluminum- The aircraft-grade aluminum is a very sleek and durable material making this flashlight one that will last for years to come. It also has an anti-slip design on the body of the flashlight so it will not slide from your hand or roll when placed on a surface. The lens is made of glass with an Anti-Reflective coating allowing for the light to beam through the lens at optimal quality.
• Low Battery Warning- The flashlight offers a low battery warning so you can know before you are in the dark that the flashlight is running out of power. The flashlight can run on batteries, comes with a chargeable USB, or with rechargeable batteries.
• Waterproof- This flashlight is also waterproof with makes it even more versatile for your needs! It can be submerged in up to 2 meters of water for up to 30 minutes. The Fenix UC40 Ultimate Edition flashlight is the perfect flashlight for you because of all the top of the lines features it has. From being waterproof, having several battery options is made from tough aircraft aluminum, to even offering top of the line LED lights with a wide beam, the list goes on. This flashlight is the only flashlight you will need no matter your adventure! 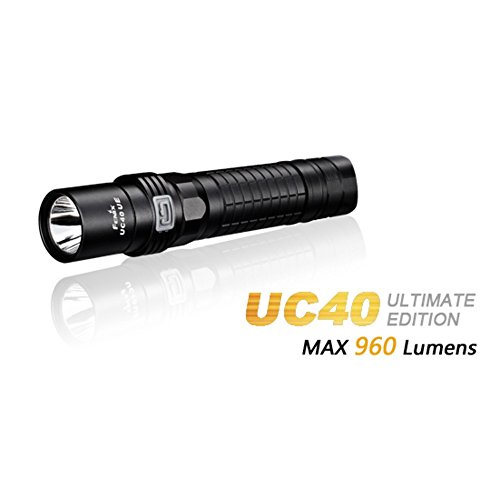 What Makes The Best EDC Flashlight

What to Look for When Buying a Survival Flashlight