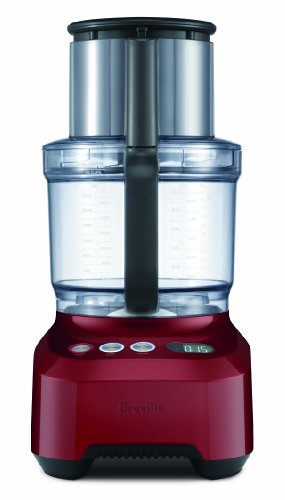 The food processor has become an essential accessory in most kitchens, but there has always been a view that it could be easier to use.

For example, it does not make sense that you have to cut vegetables into smaller pieces before feeding them in.

The Breville BFP800XL Sous Chef Food Processor solves a lot of these problems.

It is a food processor that would not look out of place in a professional kitchen. It has two bowls – the large bowl is 16 cup and the smaller one is 2.5 cup – and all of the included accessories fit into a plastic container that does not take up much space to store.

The 5.5-inch feed chute is big for a domestic food processor. It means you will rarely (if ever) have to cut up fruit or vegetables before feeding them in.

There is a small food pusher and a large food pusher. The small one is very handy when working with smaller ingredients and it also doubles as a measuring cup.

There are five discs included with this food processor, one of which is a variable slicing disc. It has 24 different settings which allow you to change the thickness of your slices with a simple twist. You can create slices as thin as 0.3mm and as thick as 8.0mm.

The other discs that are included are a julienne disc, a French fry cutting disc, a whisking disc, and a reversible shredding disc. There are also three blades: a micro-serrated universal S blade; a dough blade; and a mini blade.

Features and Specifications of Breville BFP800XL

This food processor comes with the following features:

For more information on the features and specifications of the Breville BFP800XL Sous Chef, Food Processor visit Amazon.com.

There were 457 reviews at the time of writing and the average rating for this Breville food processor was 4.8 out 5. Of the 457 reviewers, 87% gave the product the highest 5-star rating. These people liked things like the power it produced, its appearance, the variable slicing disc, the large feed chute, and the two bowls.

There were also some complaints from people who bought it to make the dough and were disappointed with the results. A few did not like the price.

The Breville BFP800XL Sous Chef Food Processor costs about $399.00. It is not the cheapest on the market but then it delivers more features than most of its competitors. The vast majority of people who have bought it have been impressed with the unit itself and with the accessories which have been designed to make food processing in domestic kitchens even easier.

A Guide to the Types of Mini Food Processors