Perhaps the most tedious part of purchasing the best angle grinder in 2021 is deciding between all the different brands and manufacturers out there. It gets even harder if you don’t know what the various specifications mean. But even if we ignore the grinder’s specifications, some traits such as ease of use and the user’s personal safety can’t exactly be expressed in a table of specifications.

It should be noted though that an angle grinder is capable of more than just grinding, most, if not all the angle grinders on the market can use different blades and guards. They can be used for basic tasks such as cutting, grinding or sharpening. They’re able to cut through wood, tiles, and metals, so long as you’re using the correct tool.

Without wasting any more time, let us go through some of the best angle grinders in 2021 that you can purchase right now. 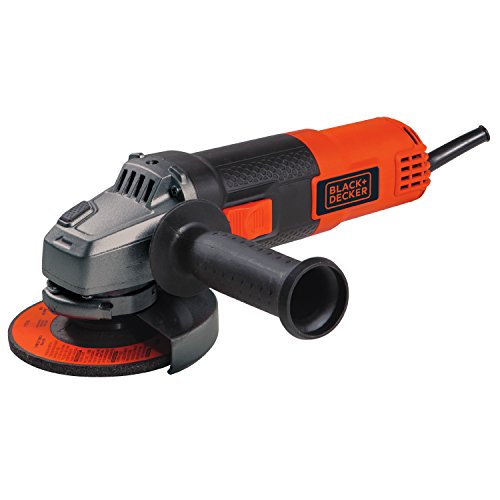 Featuring a longer life, promising durability and offering some flexibility, this angle grinder by Black and Decker is fully capable of cutting, sharpening and grinding, etc. It features a removable handle that can be attached to three different positions. Making sure that you’ll never be forced to run circles around your workpiece just to stay comfortable.

Some might consider the top-position of the handle an overkill in terms of accessibility but it’s better to have more options available instead of running into a situation where you can’t fit your angle grinder and the handle in your working space.

Most angle grinders are capable of cutting through pretty much anything you can find at home. However, if you’re interested in cutting slate or tiles then you should definitely be looking at some accessories to purchase along with it. Most heavy-duty tasks will require you to use some form of coolant, water is usually more than enough as it removes dust and acts as a coolant simultaneously. Just be sure you have the correct set-up beforehand. Check Latest Price

Definitely, a jump up in price compared to the last one but completely worth it at the same time. Dewalt’s angle grinder features a more powerful motor paired up with a paddle switch for maximum safety. Unfortunately, the handle can only be attached at either side of the blade and not directly on top of it, so if your usual tasks absolutely require a handle on top, this model by Dewalt might not be a good candidate for you.

Having a paddle switch is almost a necessity for most heavy-duty equipment. Whether you’ll be using it at home or professionally, putting your own safety first means you’ll have to live with the minor inconvenience of holding the switch on. By doing so, you ensure that running into trouble won’t mean losing a limb at the same time.

Having a stronger motor doesn’t mean you can cut through everything without preparing properly though, remember to always have the right accessories for the job and use a wet saw whenever necessary. Check Latest Price

For people who believe that quality of life is everything when it comes to choosing a product, you won’t be disappointed by Makita’s angle grinder. It follows design standards that are known to delay the inevitable wear and tear of your beloved heavy tools. Being fully compatible with both AC and DC power sources means that even if your task is out in the middle of nowhere then you have no reason to worry about carrying around a portable AC generator or inverter, a DC power source is more than enough.

That’s nowhere close to the whole story though. Makita’s angle grinder also comes with an aluminum case. Unlike most other angle grinders on the market, you won’t be forced to pay extra just to be able to carry it around with you comfortably.

As far as safety goes though, it’s a choice. This angle grinder comes with a paddle switch which ensures in case of an accident, the risk to you and the people nearby will be minimal since the motor will stop as soon as your finger releases the switch. But at the same time, some people might not be a fan of holding a button-down just to operate a heavy tool, in which case Makita’s angle grinder comes with a lock-on/off switch allowing continuous operation. Check Latest Price

Similar to the first grinder we covered, this PORTER-CABLE angle grinder also features a movable handle that can be placed on either side of the tool or directly on top of it. Offering you the best possible control under all circumstances.

At the same time though, it doesn’t feature a lock-on/off mechanism meaning that if you end up dropping the angle grinder or losing grip, it’ll simply slow down and stop instead of hopping around on your workbench, the ground or on you.

Additionally, a tool-free guard allows you to easily switch between a grinding and cut-off guard. If you’re new to angle grinders you might be wondering “why should I use a cut-off guard while cutting?” It’s quite simple actually, a cut-off blade is pretty fragile compared to its counterpart. It can easily shatter under the smallest amount of a perpendicular force. A cut-off blade provides you with a lot more safety in such a scenario. Check Latest Price

As far as features are concerned this angle grinder by Bosch takes an interesting turn. It features a Service Minder Brush which will detect and automatically stop the tool as soon as preventive maintenance tasks (such as cleaning) become necessary.

Usually, most heavy-tool users simply guess when they should be cleaning their tools or going through the usual maintenance chores. If preventive maintenance is carried out in a timely manner, a tool’s ultimate demise due to wear and tear can be delayed significantly.

Similar to most other angle grinders on the market, this one only has two possible positions for the attachable handles as well. It can only be powered via AC and does not come with a carrying case. So all you should expect when purchasing this are the listed components and a cardboard box.

Summing it all up

Angle grinders are some of the most basic heavy tools out there and even if you don’t require one professionally, simply having one around the house will end up saving you quite a lot in the wrong run. When a third party is asking for more than $100 just to cut through a simple lock you forgot the key for, having an angle grinder around would get the job done in just a few minutes.

As for which one is worth purchasing, it’s all about your personal preference and budget. Our recommendations are going to be straightforward and full of exceptions.

First of all, your own personal safety should be your top priority under any circumstances. This means that using a lock-on/off only angle grinder is a safety concern under everyday usage scenarios. However, this is not the case 100% of the time. There might be situations where a lock might be helpful and make the job itself easier. Yes, you’ll be sacrificing safety for usability, but don’t we do that every day already?

Power supply specifications are another thing which is impossible to compromise on. If your work requires you to be out of the city, away from a proper power source then you might be inclined to pick up an angle grinder that’s capable of running on DC power. At the same time though, you might wish to still use it at home without having to go through the hassle of using a third-party adapter to convert your home’s AC electricity to DC.

And last but not the least is the detachable handle. This one is a purely selfish feature but we’ll still recommend getting an angle grinder with at least two possible configurations. Being able to attach the handle on either side of the blade means that you can do most tasks without ever having to move from your position.