Even if you’ve never heard about SKIL Power Tools there’s no need to panic and walk away from this piece of equipment, this paddle switch angle grinder uses a pretty standard design making it easy to learn, use and switch over to if you’re already familiar with other products.

Taking a closer look at the grinder itself, you’ll see that the grinder comes with a secondary handle to hold on to so you can minimize any vibrations which might be caused by the grinding itself.

The grinder itself is powered by a 7.5 Amp motor capable of rotating at around 11,000 RPM, making it more powerful than Hitachi’s G12SR4 while staying true to design standards that the industry has been following.

As technology improved, so has the amount of power we’re able to provide to our handheld equipment, with great power comes great responsibility and more safety concerns. The industry has been moving towards safer equipment standards for quite a while and the SKIL 9296-01 doesn’t back down on any of them. 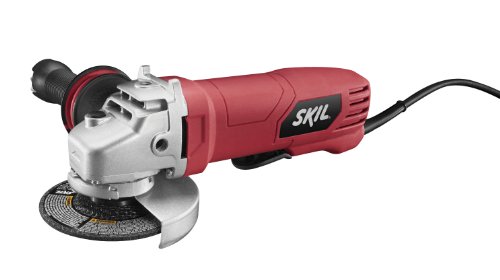 One of the most important of these features is the tool’s non-locking paddle switch, turning the tool off as soon as it’s released, unlike other pieces of equipment where this button is on top or at the side of the tool itself, the SKIL 9296-01’s non-locking release is right under the handle where you hold the tool itself.

Other features such as the presence of a rubber handle, a durable cord, and an easily replaceable grinder wheel are just some pieces of technology that we’d expect in any modern-day heavy-duty tool, the ability to safely hold your wrench on the tool itself? Well, that’s just luxury and the SKIL 9296-01 has the capability.

The SKIL 9296-01 angle grinder weighs just around five pounds, a tool that light wouldn’t have much issue dealing with vibrations but that didn’t stop the designers of this equipment to make sure that no matter what goes wrong, vibrations won’t be the case.

The external body, its heavy-duty capabilities, and dual handle mean that whether you need to grind metal or polish it, you won’t be disappointed, and if you’re in the mood to cut some stuff, then purchasing a cutting blade is all the effort that you need to put in.

This grinder is capable of operating at high speeds, able to cut through pretty much anything you can find a blade for, so long as you have the equipment, you can do it.

As far as safety is concerned, the designers have taken pretty much everything into account, whether you drop the tool while working or simply let go of it, the motor will stop running minimizing any damage which may be caused.

The wrench holder is a nice add-on, oftentimes there is no place to keep our equipment while we’re working and since you need both hands to operate the tool itself.

As far as prices are concerned, $60 is hardly anything to pay for a tool as sturdy and useful as this, it’s important to remember that a grinder can also be used to polish and cut materials, so it’s a multipurpose purchase.

The lack of vibrations and the ability to maneuver the tool with both hands makes it one of the easiest grinders to use on the market.

This tool is as light as they get as far as modern technology is concerned, perhaps we’ll have lighter ones in the future but for now, we’re stuck with what we have.

As with all grinders, using it will eventually heat it, regardless of the speed, you’re working at it’s wise to either let the blades rest now and then or use a cooling agent, but be careful since a conductive cooling agent and electricity don’t go well together.

Regardless of the low price and general sturdy look of the equipment, you need to understand that at the end of the day it’s still a $60 piece of equipment and can’t compete with most high-end industry-grade equipment whose price would be in the several hundred if not over a thousand dollars.

At the end of the day though, if you only want a heavy-duty tool for use at home or minor tasks, then this is a good choice since priced at just $60, it’s able to relieve you of having to saw through wood or thin metal because isn’t that the whole point of technology? Make the average Joe’s life easier?