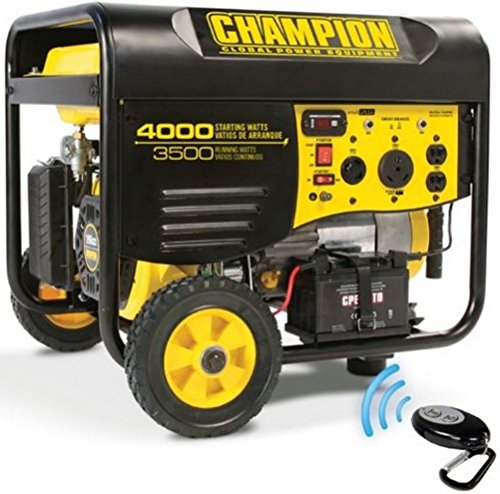 Champion Power Equipment 46539 comes ready from the box. It is loaded with all the features an average user will need and it has a few advantages others don’t. Overall, this may be the main choice in the price range in question.

Remote key start
If you are thinking that remote key start is a useless feature, lets us explain why you are wrong. All generators must be used outdoors, where CO2 is released into the atmosphere. Directly, this means that a generator will be far away from you at any given moment. The remote key start is the best alternative and the best method to eliminate frequent visits to the generator. When an RV and when you wake up, this small addition can truly make a difference.

Compatible with all RVs
We mentioned that this unit is useful for RV owners. Another reason why you should consider it is the fact this model comes with 30A outlet, the standard for RVs. Yes, other models may have the same outlet as well, but don’t forget that this one has been optimized for usages in RVs. As such we get the ability to run a 15.000BTU or air conditioning. 3500 running watts and 4000 starting watts will be more than just sufficient for most of you.

12 hours of running time at 50%
Most generators have a long-running time but at 25% of load, which isn’t ideal. This one is different and much better if we can say so. The engine is 196 cc unit, capable of providing up to 12 hours of running time in all conditions. The load will be usually at 50% at most times, meaning that the 12 running hours are constantly reachable. Most users won’t need higher levels of load, therefore we can assume that the mentioned running time frame is achievable in 100% cases. In addition, the engine is the latest generation unit, approved in California, with cast iron sleeve and cold start feature. Interesting: Cold start feature allows users to start the engine easily and warm it up in less time.

Volt Guard is included as well
Volt Guard is a more important feature that most of you may believe. First and foremost, it is capable of preventing damages to all electronic units powered by generators. Because we mentioned this model is suitable for RV users, we can add that Volt Guard is a mandatory feature as well. Additionally, we will mention that the Volt Guard is constantly active and it doesn’t require any adjustments or settings.

Conclusion
Champion Power Equipment 46539 is loaded with all the features and systems most users will ever need. Furthermore, it is one of the more desirable power generators at the moment, considering the value for money and the quality you will get!